Systems virology of coxsackievirus B3 pathogenesis 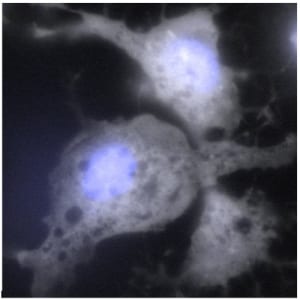 Coxsackievirus B3 (CVB3) is a cardiotropic positive-strand RNA virus that is a leading cause of viral myocarditis and heart failure in infants and young children. Nearly all work on CVB3 virology has focused on the docking interactions and gene products of the virus. Sparked by an early collaboration with the McManus laboratory (University of British Columbia), my group has taken a fundamentally different view of CVB3 pathogenesis as a systems-level perturbation of the host.

By exploiting the polypharmacology of host-cell signaling inhibitors, we have uncovered novel posttranslational and autocrine mechanisms during acute CVB3 infection (1). Moreover, we have shown that dynamic changes in the host-cell signaling network are sufficient to predict the outcome of acute infection to within 97% accuracy (2). Combinatorial perturbation of the most-informative host-cell pathways reduced CVB3 transmission by 1000-fold and revealed new mechanisms of cytotoxicity during infection. Ongoing work is focused on systems-level analysis of signaling dysfunction during chronic CVB3 infection in an in vitro model. Chronic CVB3 infection ultimately leads to dilated cardiomyopathy and the need for heart transplantation in infected patients. We seek to determine whether systems-biology approaches can have the same impact on virology as they have had on cancer biology (3).